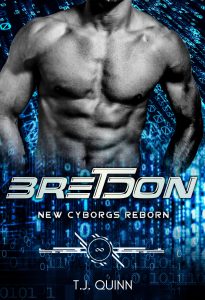 Bretdon hasn’t considered escaping.
Of course, that idea has always been in his mind, especially ever since he heard about Jarcor and all of the other cyborgs that had managed to escape.
But, when he finds himself alone, in the middle of the woods, his desire to escape becomes the only thing he can think of. All he needs is to find someone he can persuade into helping him to free himself from the humans’ enslavement.
Ophelia is crossing the country to go visit her mother. With the world at war, it’s not the most sensible idea she has ever had, but she hadn’t been able to continue saying no to her mother.
On a minute of distraction, she runs over a man on the road. Startled, she steers the wheel and jumps out of the car sure she has killed the stranger.
But he isn’t dead. He’s very much alive and he’s a cyborg.
From that moment on, their lives intertwine in ways they never thought possible.