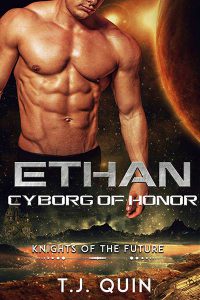 In a devastated post-war planet Earth, a group of cyborg warriors gathered to search the universe for the best place for people to relocate. Some of their clients had some very particular demands. When Kawan Gyeon, a Korean warlord came to visit Ethan Hunter, the cyborgs leader, Ethan knew his demands wouldn’t be like the others. Gyeon wanted to take his people to a planet with no other human settlements, one where he could set the rules himself. So, he hired Ethan and his men to find the perfect place for that.

Ethan was the first one to find a planet that satisfied the conditions requested by their client – a planet with water, a perfect atmosphere, fertile soils and ruled by an alien race that had turned the planet into some sort of welcoming grounds for those with no home. The Dreshanians had built several colonies they sold to those people in need that were willing to accept their rules. Apparently, everything looked perfect, but once Ethan started to dig deeper, he found out things weren’t ideal as they seemed.

Despite all the problems, Ethan met an alien female that reminded him he was still human, that inside his powerful body there was still a beating heart with very human needs. Neela slid into his heart and now he would have to find a way to keep her in his life.