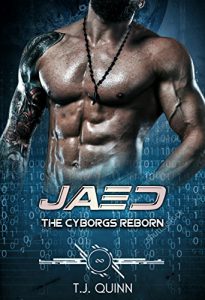 Tossed out of a Taucet’s vessel in midair, Jaed found himself wounded and under the protection of a human female. She had found him on the snow, right after a big storm hit her small farm. She took care of him, giving him the needed time for his nanocybots to heal him and put him back on his feet. Certain the army would come for him as soon as the storm faded away, he didn’t try to escape, at least, not until he realized going back wasn’t an option. He had found love and he wasn’t willing to lose it.