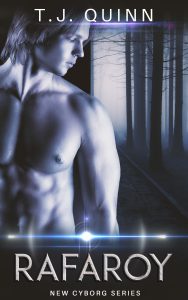 Earth was attacked by the Taucets, an alien race, determined to steal the planet from us. Forced to fight against a powerful enemy, humans created the cyborgs: enhanced human warriors, but they soon forgot about the human part of these powerful warriors.

Enslaved by the humans and forced to act against their will, the cyborgs quickly rebelled and started to escape the human’s oppression. Rafaroy is one of them. Helped by a human woman,he escapes during the invasion from a Taucets’colony,but gets injured on his way out.

Elena, a human female enslaved by the Taucets, uses the attack on the colony she’s in, to escape both the humans and the Taucets, just to fall prisoner of the sensuous cyborg she bumps into on her escape. They go through a journey not only of escape but also of self-knowledge as they act on the potent attraction between them.